So last night if you realized, Instagram has finally decided to remove some of the inactive accounts/spams accounts.

WHICH MEANS. We all have a drop of followers.
But the question is - how drastic is that drop?

And then the truth revealed!!

Ive seen some drop from 20 thousand followers till 4 thousands only. And some even drop up till 90%!! WHAT DO YOU THINK. 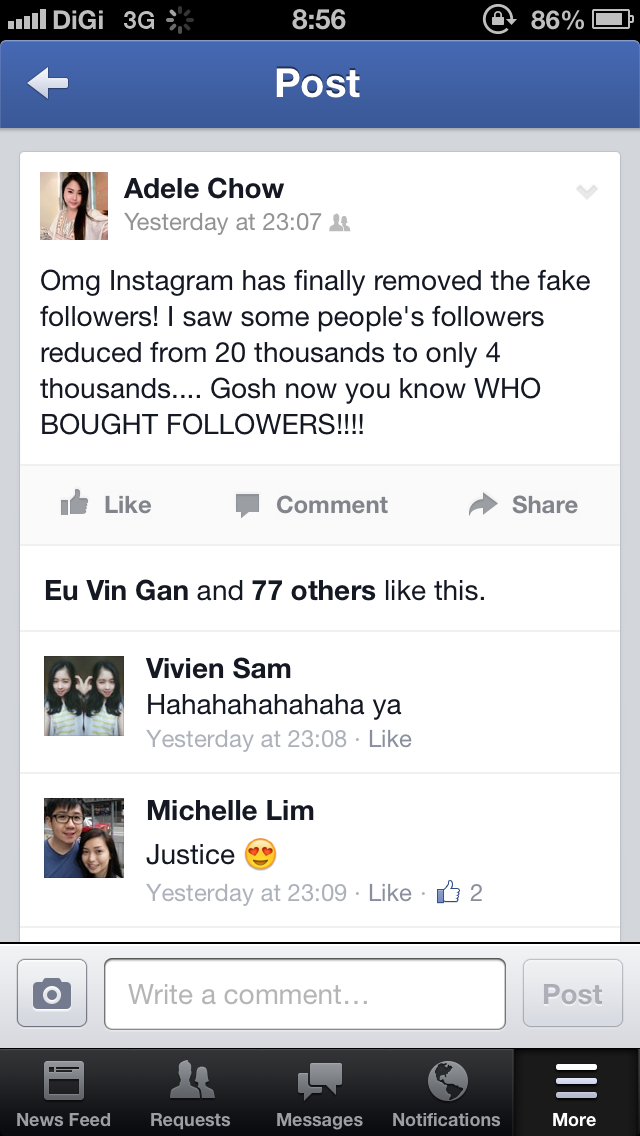 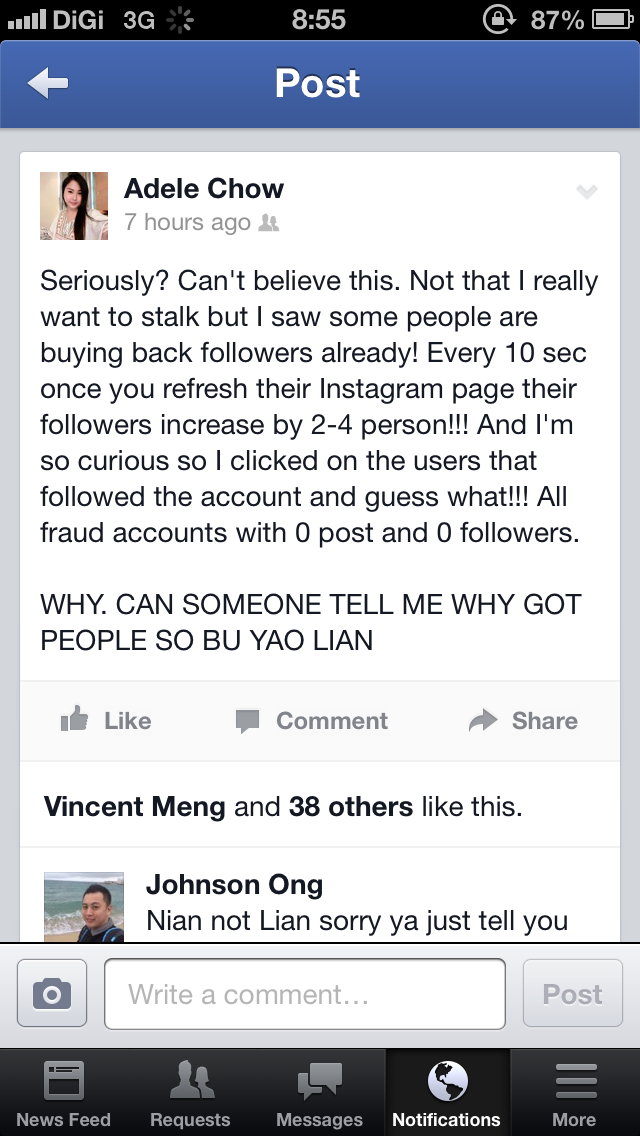 Honestly the first thing on my mind was wondering how these people feel and react when they first saw their followers numbers dropped so much - oops I mean when they saw the truth has reveled right in their faces yo.
And the worst thing is, just few hours after the whole deduction of followers, I saw some already started buying back followers!!! LIKE SERIOUSLY?!!

How would I know? Because so happen when I was doing my stalking, once I refresh on the same person's insta account and the followers are increasing by sequence! Like 2-4 new followers in every 10 seconds!?  Of course, if your follower base is already more than hundreds of thousand, it is normal to get followers every minute even seconds. But the few that I'm talking about - they had less than 5,000 followers! Initially were all above 15,000 please.

I personally had a 300 drop on my account which makes me having only 6,000 followers right now - so 5k or 6k we are all in the same ranged what!! Of course I would know it's impossible to have people following you every 10 seconds la!

So long story short, Im writing this down because Ive been asking myself, WHY WOULD PEOPLE EVEN BUY FOLLOWERS?! And these are some of the points I have in mind. Disclaimer ah, all are purely based my own view only.

1. They want fame
What are the odds? In this world we are living in right now, people judge you from your looks till your outfit to what bag are you carrying - now even till your social media platforms. More followers means? You're more "famous".

2. They need to show people online that they are famous, they need to prove a point
Which is link to my first point, but adding on - these people who bought followers specifically want fame ONLINE because its the easier way out! Some celebrities in Malaysia don't have much followers on social media either but they're famous offline.

3. To create illusion
So you start wondering who are these people? Why they have so many followers but you haven't heard of them? There you go, fallen into their game.

4. To get clients in social media deals
Which is already cheating!  This is the part which I can's stand the most. CHEATING. Cheating your clients and your agencies. I worked in a social media field and I know how this works. The more followers you have, the more payout you get simply because you're supposed to be more influential! But since the followers are FAKE, which means all the content are targeting ghost la

5. To make others who worked so hard earning each number looked stupid
I'm not a full time blogger nor I make money through my social media. However there are some people out there who worked so hard all these years building up good content, snapping editing nice pictures and sharing relevant information - but guess what? They mean nothing because someone out there could just throw a sum of money and ta-da!

6. To make money
.. the cheating way.  Which is linked to my point #4 More followers, more money.

7. To be able to categorized themselves with the more influential people
You see we all know how this cruel world works. Rich people mix together, smart people mix together, eventually, "famous" people do want to know each other as well. So they buy followers to make themselves looked famous so they can find their way to be around these real influential people - especially in events nowadays. Hah!

8. Because they're just too thicked face
Yea, I wonder what's running through their mind - especially last night! Panicked? Angry? Or what?

9. Because they thought people will never find out
Or they thought everyone else are stupid and foolish to even find out.

10. Or they don't even care if you find out at all
Yeap. That explains all.

I'm NOBODY to judge but I want to write this down to remember this -
In life, be truthful to yourself because there's only ONE you on this earth.
Trust me, WE ALL HAVE OUR OWN VALUES.

Yes followers do mean something but it is NOT everything.
Think about your reputation and integrity;
Especially if you're in this social media field.
Everyone knows what you're thinking.
Think twice.

looks like someone needs a bucket load of aloe vera. i can help to apply to your butt if you want

It seems to me that doing businesses honestly isn't valued in these days, but big liars will be exposed at last.

Leng jor, you kicked burst them.

@anonymous - lol thanks but I don't need it haha

@boon kheng chai - yeap be truthful to yourself, thats the most important thing :)