Before I started, I would like to announce the death of my FACEBOOK ACCOUNT, MSN and also hotmail add! T_T
(adele-jaychou@hotmail.com) is no longer active anymore as i-dont-know-which-bastard-hacked-my-email-add! :"(

I'm now using this facebook acc, CLICK so feel free to add me as a friend okay!
New acc damn lonely can. :(

So anyway.... I know, I've been a super lousy blogger lately. Yes, you can put the blame on me since Akon said so too! LAME, I KNOW RIGHT. After all, I'm still as lame as ever! Haahaha! (: Well, I should really cut the crap off and start blogging. Oh why the 'COMBO STYLE' title? because my pictures are all small small and in one picture like that, you get me? -_____-

So basically, I was having my 3 months college break which explains all my 'funky' activities lately. Now guess what? College is starting next Monday! - which makes me all hyped up! Believe it or not, I am really looking forward to the 3rd Semester as it will be so much more fun, and of cause, it too require much more hard work! :O

Within these 3 months of holidays, I have to admit that I really partied too hard and I need to cut it off after college starts. Besides that, I too made used of my holidays - work! - more cash $ - more new cloths - more travelings! (which reminds me of my Penang post, PD/Malacca post & S'pore post) I WILL UPDATE OKAY! TRUST ME!!! :S

-
Back in November, one of my job was working as a promoter at PC Fair - Papago/ Wayway GPS company. 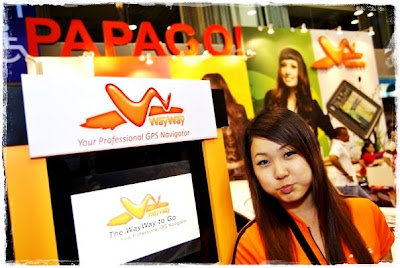 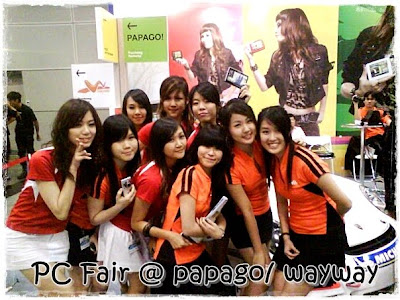 With the rest of the pretties (: 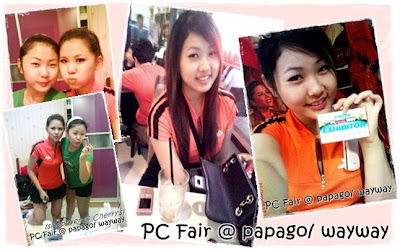 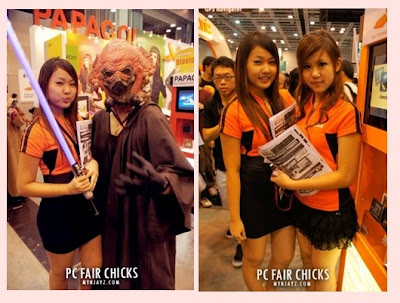 Thats Alienware character on your left, and Cherry Teng on your right. 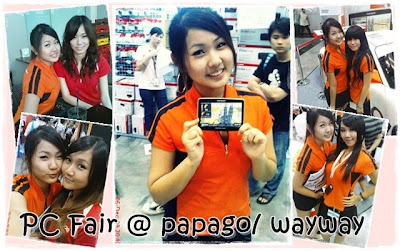 I tell you, working @ PC Fair isn't that easy, seriously!
Yes la, no need to work on sales; all I have to do is just stand and whole that dummy set of GPS/ giving out brochure, BUT YOU HAVE TO STAND WITH HEELS FOR MORE THAN 10 HOURS! can die immediately -____- 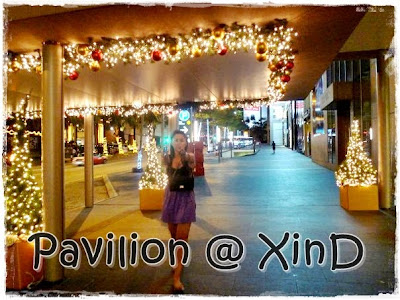 Has so much fun hanging out with XinD @ Pavilion and I insist to blog about this although not much pictures were taken. 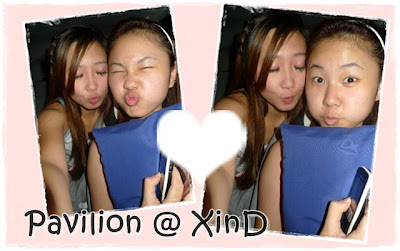 We went for Avatar(and that movie's the bomb!), shisha @ carlos, lotsa lotsa gossip sessions, mamak sessions, stupid dare game in the car, not forgetting the midnight arrival of us into her house! WOOHOO! Her fav quote: 'love you toooh!'
(BANGKOK END OF THE YEAR OKAY!)

BIRTHDAY PARTY #1 - Bell's 18th birthday party @ her club house - Gita Bayu.
I was @ her place since 2pm although the party starts @ 8pm because Jerome was giving her a hair treatment as present and I decided to dye my hair as well! 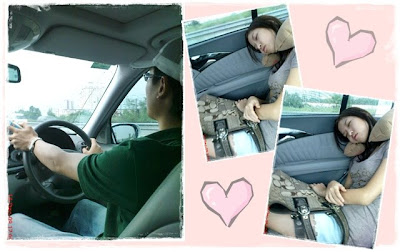 I don't rmb when did I took these pictures!
AJ's driving; Bell's sleeping muahaha! 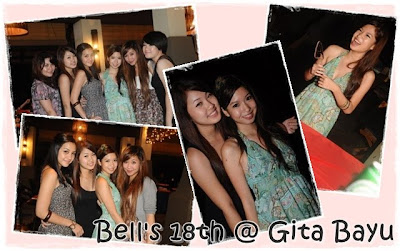 Pretty bday girl with her chicas! 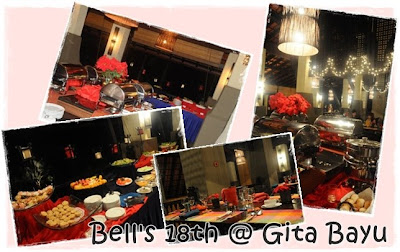 The place with super nice ambiance and food! 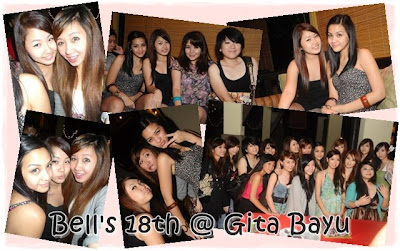 I really wanna list out all the names but its too many but I still wanna list ah!
XinD, Helen, Amelia, Stephanie, Jacklyn, Daphne, Chuckei, Elysia, Kimmy, Sammy.. and a few which I don't know... oh and BELL! :)
It was a great time catching up with the babes especially Daphne! We used to talk to each other kinda often but somehow we drifted away as days goes by. No worries, I still love you Daph! *smooths*

BIRTHDAY PARTY #2 - Frederick's 19th bday @ Sunway Resort.
I remember reaching there pretty late because I was working before that. So basically I missed out the whole cut cake sing song thing and the drinking part too.

The place was real pretty and relaxing, too bad when I arrived it's already too messy & dirty for me to snap pictures so yeah.. But you can try to imagine la, pool inside our resort, something like chalet like that one. lol. But nothing will stop me from camwhoring! :D 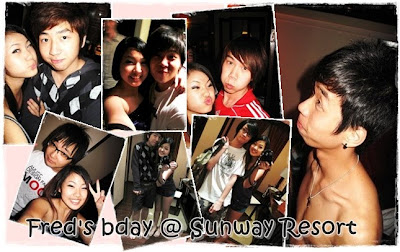 Bday boy on your right, Jordan, Antonio, Joshie, Ah Tok and Kin on your left. 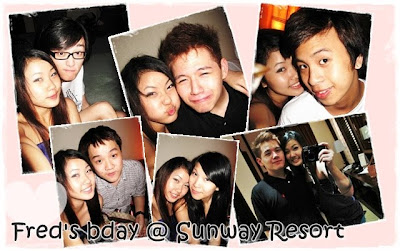 
BIRTHDAY PARTY #3 - Kok Hoe's 18th bday @ The Bank.
(kok hoe, don't say I never blog about your bday ahh!!)
I remember reaching before 12am but I think the pictures below right... langsung tarak kok hoe punya face one lor. Because, apparently he 'died' before 12am! Tsk, what a waste! 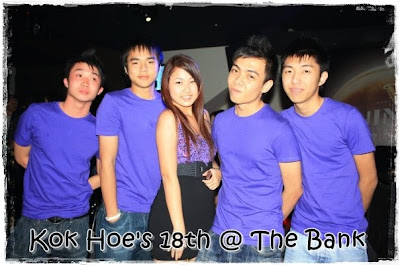 The only picture that you can see Kok Hoe's face!
Oh, spot the purples? I make them wear it! Daily Dosage of Love FTW. 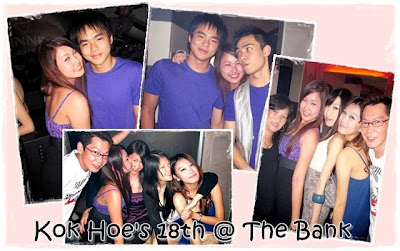 It was really a great night as all of us were having so much fun!
(spot nick & aaron - half DDOL) 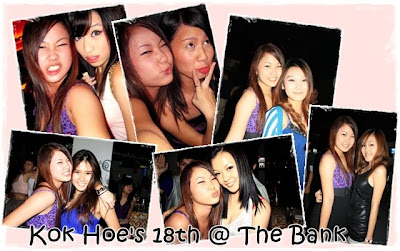 I must take picture with all the chicks one, they're all gorgeous don't they? 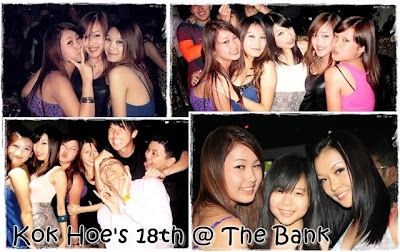 There are actually more pictures but I... think these are the nicest ones already!
Okay here it goes...
myself, Yi-vonne, Shirley, StephanieJN, Siew Lee(?), Rachel(?), Phaik Chia & Shee Han!

It was really a great night! Right steph? ((:
Sometimes pubs are better than clubs! I heard some people said it was a bored night which I extremely do not agree with because.... PICTURES SAYS IT ALL RIGHT? *laughs*

BIRTHDAY PARTY #4 - My dearest Rachel & Hui Sien's 20th @ Maison!
Mhmm.. They need no introductions already as they're my pretty twin sisters :)
I wanted a dress code and when I asked them they said they don't have one. Well, I don't really rmb how the RED came out but yes, the dress code was RED.

If you noticed, my make-up was super thick that night all thanks to my pretty sister, rachel that did the make ups for me! I love it, but I will never know how to draw until so pro one la FML. 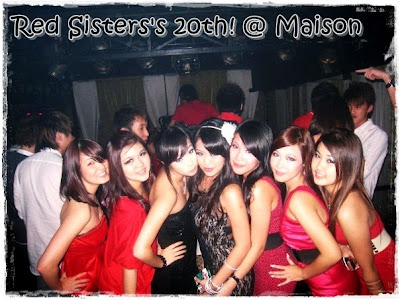 Us, all in red dress with the bday chicks in black. 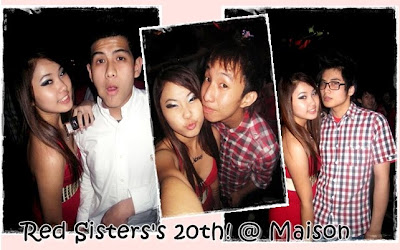 Nigel, Ian & Cassidy!
I was so glad to see them there as I've already forgotten when was the last time I saw them. 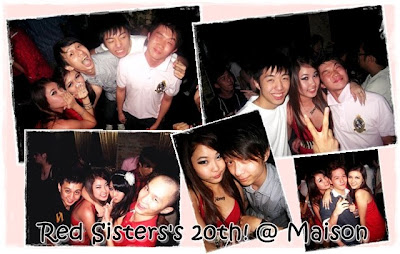 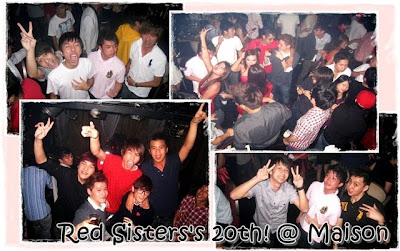 What a night, everyone's crazay!
__

WOOSH! FINALLY IM DONE.
I TOOK LIKE MORE THAN 2 HOURS TO COMPLETE THIS POST!
So, am I forgiven? (for not updating so long....) T_T

I can hear my both phones are ringing but I couldn't be bothered as I desperately wants to complete this post! (sorry to those who called me, and if you are reading this la)