Internet is my daily dosage of strength.

I did it! I did not surt the net for FIVE FREAKING DAYS!!!! & now,
I'm back to the net, lol. If you are reading this and you don't understand kindly scroll down until the previous post & you will understand already muahahaha.

I have to admit, life without the net was miserable(for me la). Seriously, the first two days(Mon & Tues) was awful! I woke up, staring at the com, don't even dare to switch it on for notes, I know I can't resist but typing the "F..A.." or "T.. W.." FML HAHA LOL. But the following days was okay la, maybe Im used to it already & also thanks to my dear Melisa that brought me down to KL for some shopping! (: Changed my phone since the pathetic Sony K810 failed on me badly. Bought myself lotsa tops again!! Aww, you guys will get to see it on my Bud-jet Shopping Post soon.

Currently munching Beryl's Almont Chocolate while typing this, nommm yummyumm~ (I know la it's damn fattening but who cares la right? Okay I will elaborate this soon) 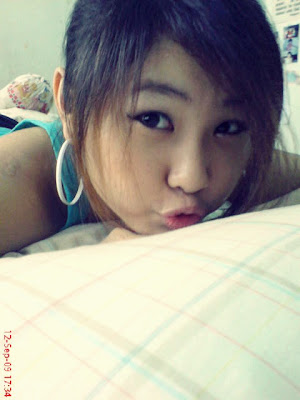 1) Showing you how happy am I la! I'm done with my FINALS, wooohooo!!
Which spelled the word: H-O-L-I-D-AY !!! ♥
(actually this picture was taken last month when I was waiting for Tzia to pick me up for the T-music Concert lol) 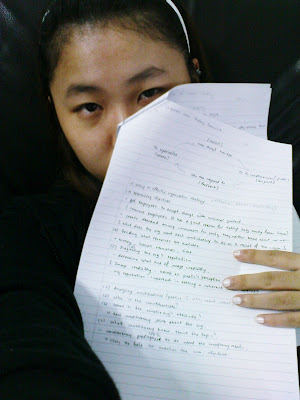 2) Another picture to show you the contrast of myself. Yes thats me camwhoring early in the morning while waiting my dad to send me to college. Ya la I know I look damn chan damn yong sui la. What to do? 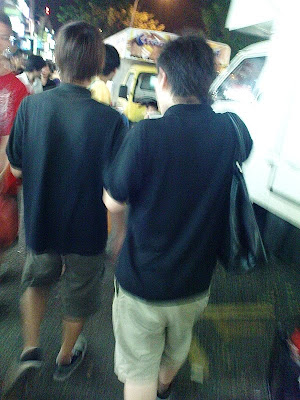 3) This picture was taken few days back when I went Connought night market with them brothers & sisters.
Motif of this picture: spot Edwyn that's holding Arie's handbag. So.... (starting with the letter G end with the letter Y) :P 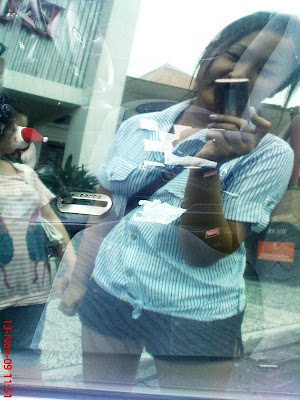 4) That's how I look like yesterday after we finished our last paper on 11am. It was taken infront of Sunway Pyramid jockey parking. Yes I straighten my hair(if you realize) but sorry la I haven't have the time to cam-whore yet but who cares la since no one realized the difference of my hair!!!!! T_T damn sad can! Sigh! 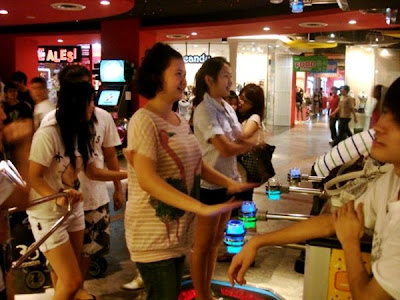 5) That's me & Angie playing the dance game. (I realized myself wearing checkers so often I think I'm in love with checkers tees) Spot my bunch of coursemates hehehe* They very kawaii one I love them so much awwwww :) 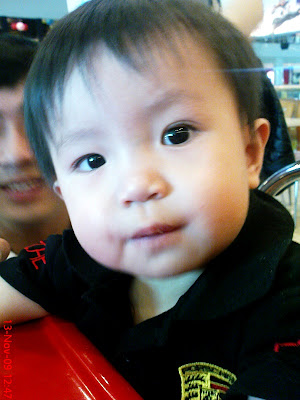 6) That's Vee Jack! Our toybaby of the day :)
He is effing cute ehehhe! Its been a while since I ever see a baby. As in, play with the baby and stuffs like that. 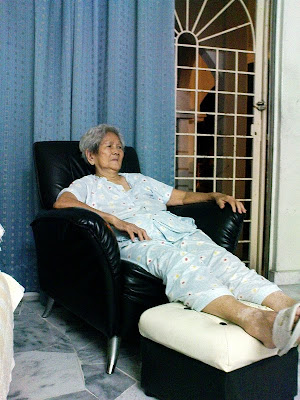 7) Ini popo saya yang berry strong. FYI, she's 84 this year and she does ALL the cooking for us. Random but I still wanna say, I love my popo the most! (she also say I fat already wth)

Okay I know I damn bad blogger 5 days never update but dear readers please don't give up on me because now my finals are done, college also no need go already, means.... I HAVE PLENTY OF TIME TO UPDATE MY BLOG! Serious one la not joking one! I wont bluff your feeling geh, heheh! (Genting post, and job post coming up)

Before I signed off, I wanna say something.
I KNOW I VERY FAT ALREADY LA NOW!!! :(
I also don't know why, I really gained a lot of weight compared to last time. (last time means few months back) Ugh, I personally think that maybe because I'm much happier already that's why got appetite to eat more lor, and also now I also go for different kind of yum-cha sessions everyday so you know la, drink once, drink twice; then midnight mouth itchy then Roti Telur here or french fries there. Pfffftttt. DAMN SAD CAN. I gained like more than 5 KG already so yeah, I REALLY KNOW HOW FAT I AM LAA. Stop hurting my feelings :'(

Imma start exercising more often, eat less! I don't wanna be fatty although I'm used to the name adele fatty already. (do you know most of my close friends don't call me adele but fatty!??) HHAHA!

haha! people tend to get fat during exam season. must be the constant eating. :D

HA you're back!! congrats on winning da deal.. =) and u straighten yr hair? wasn't it already very straight? hahaha..

Amanda: Haha, It LOOKS straight but my hair is damn frizzy one! :(