Yes I know I should be blogging about NuffNang Awards by now but I promised the bunny post will come first right? NNawards will be the next one, I promise! *cross my heart* :D 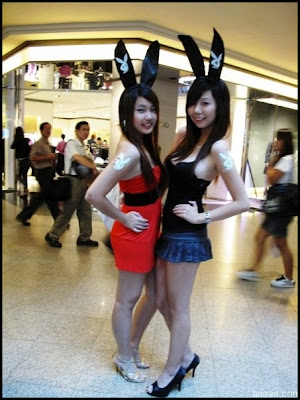 The initial plan was to support Tzia & Jia Shin at MidValley because they were one of the bunnies. I swear I was struggling hard to decide who to vote as my favorite bunny because the bunny that has the most vote could won herself a Burberry or Prada bag!

Suddenly out of no where, Bell called. (talk talk talk..)
I met her up and guess what, she just pulled me together with her and both of us became one of the bunnies too. (lol good also la no need to fan who to vote for! I sendiri need votes ahh now haha) 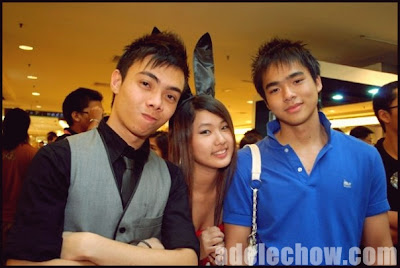 Yes I was there with Nick & Aaron.
FYI they are my daily dosage of love (: 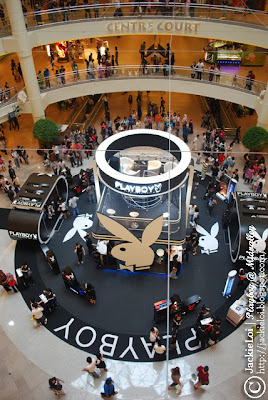 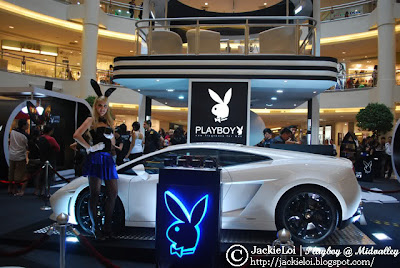 with SMOKING HOT Eurasians & a Lamborghini with the huge playboy sign on the bonnet! 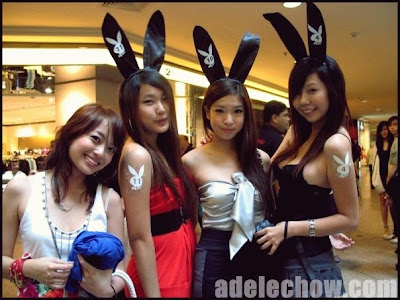 Audrey the cute, myself, Bell the princess & Tzia my bestie (: 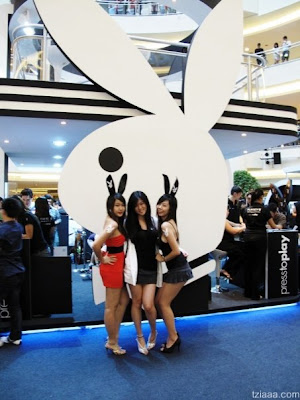 Us with Mon! Where's my Haagen Dazz babe? :D 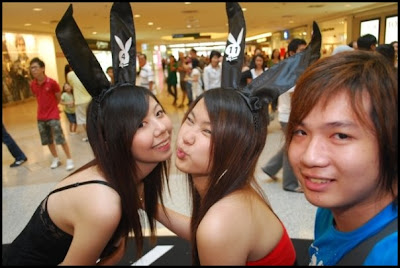 Not forgetting my BOSS :)
Dusty, Joshua was there too although I dont have any pics with them *sniff* Anyways, thanks for the pictures! 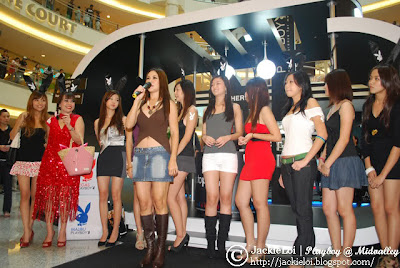 The thing started when Jojo asked all of the bunnies to gather behind her. 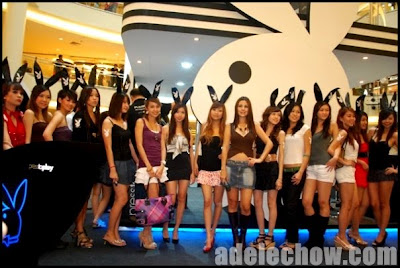 And she showed us how to post because we had to do a simple cat walk.

Aku bukan model lah, thats why I was damn shy okay!
I wanna clarify this because someone that was in MidValley happens to be one of my classmates friend and that person go tell my classmate this: "Ha ha Adele damn shy lor when she walk!"

:(
Okay I will try to walk with my not-so-shy look anymore!


ANYWAY, THIS WAS THE FUNNIEST PART. 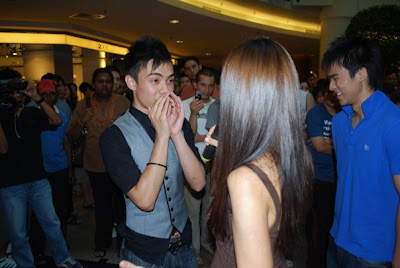 Jojo picked 3 guys to be the "man pillar" and coincidentally 2 of them was Nick & Aaron!
*laughs* I was thinking that they would hate & love me at the same time for bringing them to this event! Why hate? Why love? 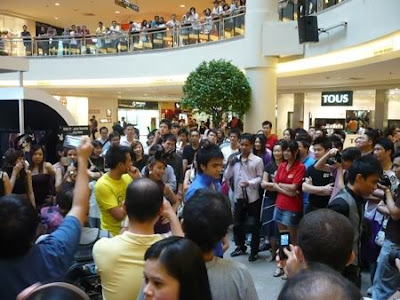 Hate, because they were surrounded by tons of people & flash lights! 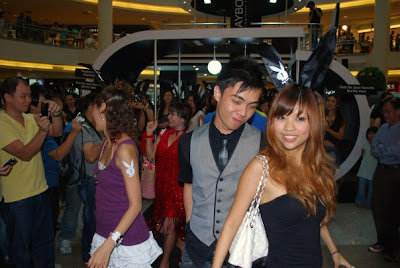 Love, because... They get to "dance" with all the bunnies?
Thats Ringo beside Nick, and try to spot Redmummy behind! 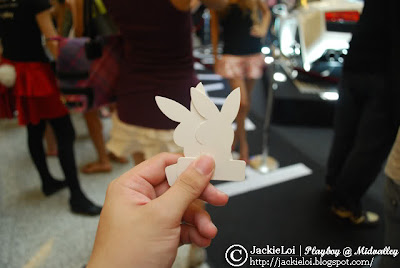 and so the voting begins! (:

It was fun asking random people to vote for you especially those who are super friendly although there are some people that desperately want a picture with you and those some people keep coming to you again & again. BUT. Overall, I had a great time mingling in the crowd, lol. 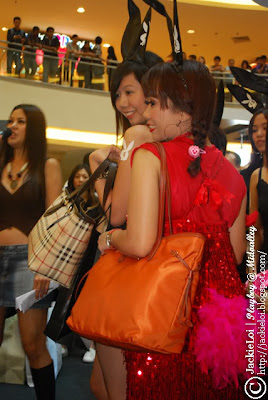 Redmummy won with 87 votes followed by Tzia with her 54 votes! 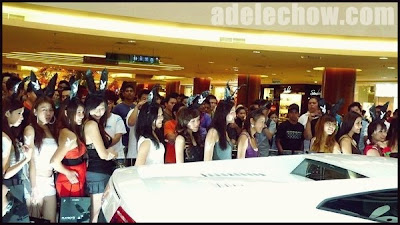 We had the chance to post with the Lambo also! Hehe. 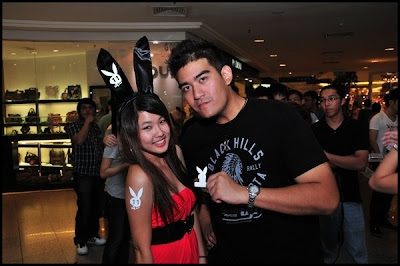 Say hi to Shaz! This was taken after the thing. 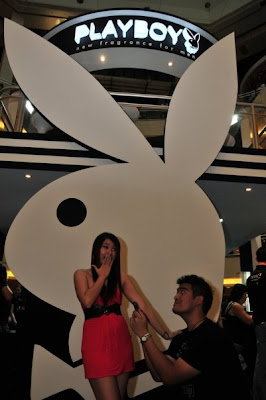 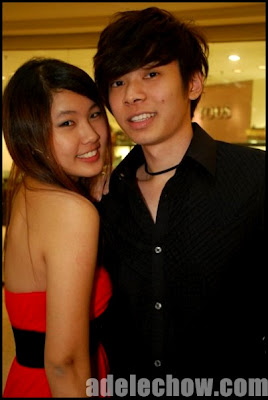 His name is Tiger, but he is not TIGER at all. HAHAHA!!
Chacha & Kian Thong was there as well. 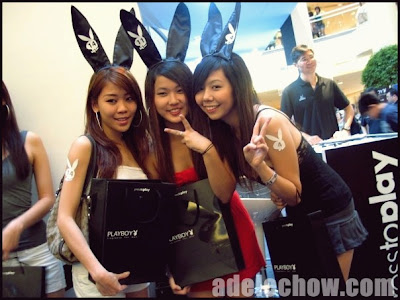 Oh wait! What to wear for this weekend? Its halloween babehh!! Its time to dress up(as in really dress up not slumber one) and party after so long! Because after that, imma transform to a bookworm. Like hello? Finals is in 2 weeks time! :O

Did I mentioned that today was the last day of this semester? Oh well.
I need help with my Illustrator (Vector) assignment as well.

what's in the playboy goodie bag? anything fab? XD

Codykate: haha, its just a man fragrance, and a few samples & one cute playboy notebook (:

awww no pics of me and you